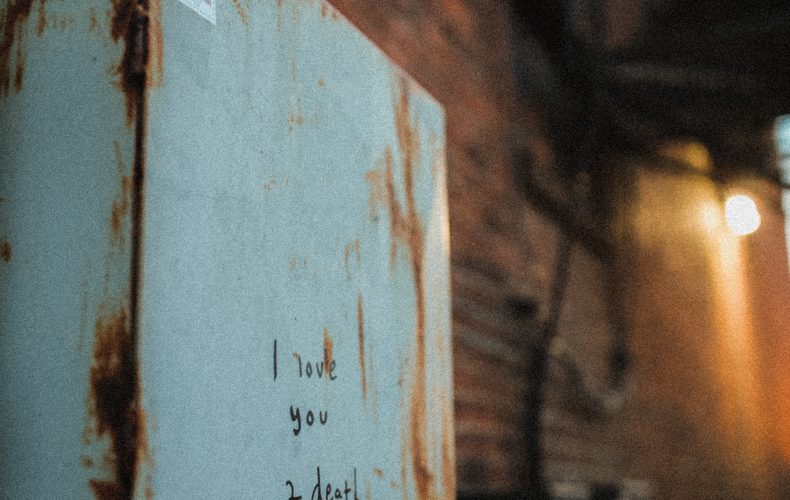 *FIRST NOTE: This is the second post in a series called Breakup Subscription Boxes. It may do you some good to read the first post before diving into this one otherwise you probably won’t get it. While I had originally intended to do two more posts – similar to this one – it’s a lot of work to get all of this “form look.” So if you want to read the other two, you have to subscribe. The other two will be exclusively for subscribers. Head to the home page and wait for the popup. Then put your email in.

**SECOND NOTE: This is a fictional profile but based on real-life events. I’m filling this out as though I were going to send my past self a breakup box to cheer me up. 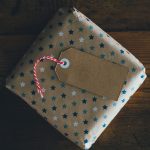 Tell Us About Your Heartbroken Pal

Fill out this form. Feel free to be as detailed as you would like. The more we know, the closer we can get in helping your friend manage their way through this breakup.

Name you would like us to use on the box: A

If you could name this box as if it were a headline describing the breakup what would it be?

Master Manipulator Gets Dumped by Younger, Smarter Female with Her Entire Life Ahead of Her and No Time for Crazy Lies or Desperate Attempts to Keep Her 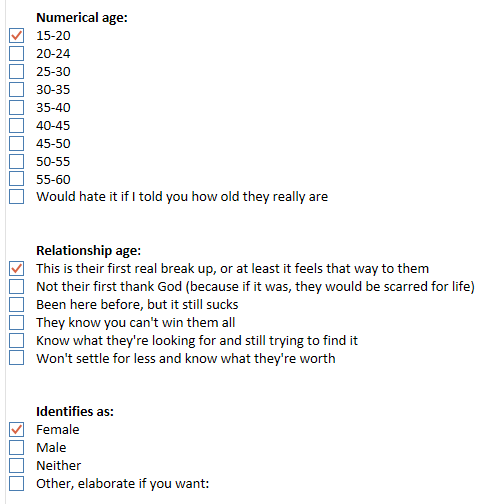 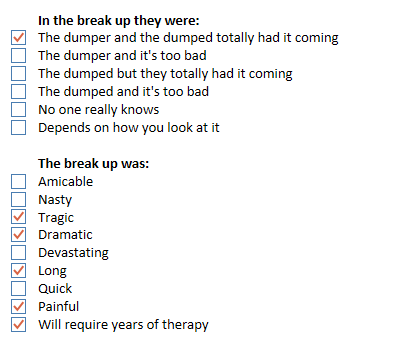 According to them, this how the story goes (tell us as much or as little as you’d like, but remember we love a good story):

This guy was pretty much her first love. Like head over heels kind of thing. Like she thought (pretty naively) that he would be the “one” kind of thing even though she was only in high school. I know, I know. This happens a lot with those first loves.

It was long-distance the whole time, but it lasted about 2.5 years. Probably if he had been nearby it would have ended more quickly. She would have seen the problems earlier on. But with only letters and long-distance phone calls, and the occasional super romantic gift in the mail or spontaneous surprise visit home, a lot looked good ‘on paper’ and enough looked fine in person.

He was kind of a master manipulator. He was older. Wiser. (Not about everything, but the conman kind of smart.) She was naïve and a hopeless romantic from the time she was five. I’m not exaggerating. This was a recipe for disaster. They both felt misunderstood in that way that teenagers often do. But they understood each other. On some level.

When her senior year rolled around and it was time to pick a school, the idea of moving away from home and having a world of opportunities open to her, really excited her. All of that scared him. He clung. She retreated. He clung harder. She retreated more. Things got kind of crazy. He made up a wild story that ended up making local news. People saw the holes in it immediately. The story got retracted. That was the last straw.

Finally, she pulled the plug. He held on harder, claiming to have a potentially fatal tumor with the hope of guilt tripping her to staying. She laughed. Not her most sympathetic moment, but she didn’t believe him this time. She didn’t budge. The breakup was final. He continued to communicate for another several weeks…

There could be a book about it. 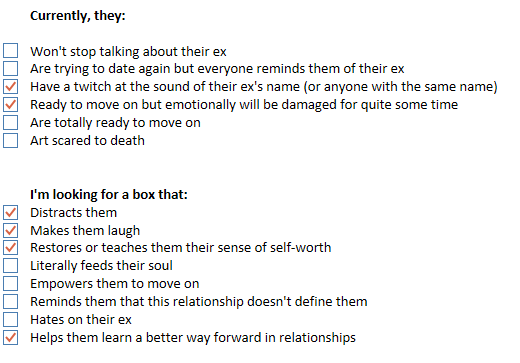 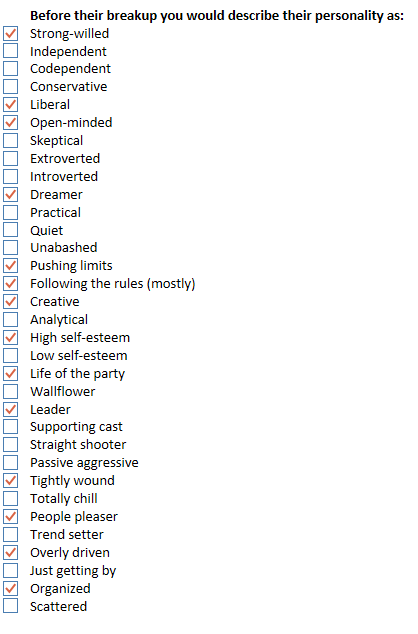 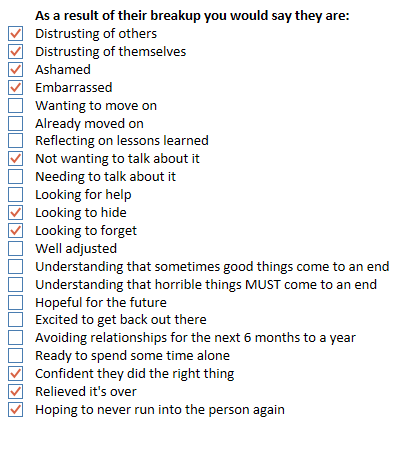 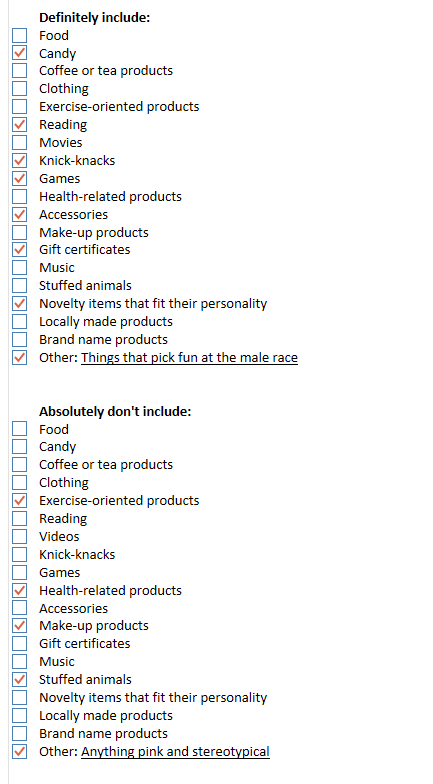 Tell us a little about them and their interests:

A loves board games and movies, chocolate, spending time with friends, and being sarcastic. Her favorite movie genres are musicals, horror, and drama. She almost exclusively shops at American Eagle.

She only wears eye makeup. She does not blow dry her hair in the morning. She’s an overachiever and highly organized. She could benefit from a massage and therapy. She’s currently beating herself up for her poor judgment in character and identifying all of the red flags she feels she should have seen. Other than that, she’s smart. And loves to read when she finds the time.

She’s also feeling pretty relieved about the breakup even though she is also incredibly mortified.

Tell us about their food preferences and dietary restrictions:

Ally loves carbohydrates, especially pasta. She also loves cheese, ice cream, and French fries.  At this time in her life, she has no food sensitivities or allergies. 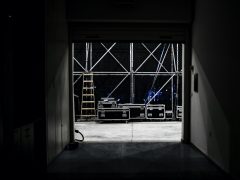 The Dream: My Agent Called, She Wants Me to do The Ellen Show 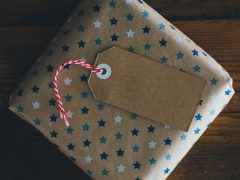 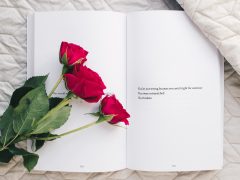