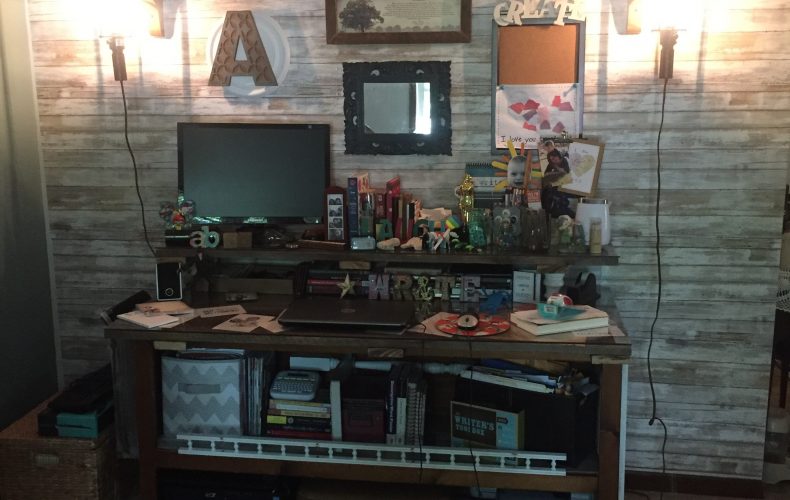 Writing Space: A Wall of My Own (Which Obviously Makes Me a Real Writer)

I kind of always felt like real writers had their own writing space.

I attributed some kind of authority over their writing life to the writing space they created in. Ordinary people call these home offices, but that sounds stiff and boring. Like the place you sit down to pay your bills. Fuck that. I don’t want some boring space that lacks imagination. Nor do I want that to become a place to pay my bills.

I’ll continue to pay my bills at the kitchen counter. Because my paychecks pay for food on the table. And I associate food with the kitchen counter. (The counter is the place I dump my grocery bags when I get back from the grocery store and hope that my house elves, Marlin and Moyra, magically appear to unpack them. Alas, Mar and Moy are nocturnal creatures and prefer playing with the cat at night then being useful during regular hours, like when I get back from the grocery store).

When I was a little girl and going to daycare, there was a little red desk in the kitchen that I would sit at and pen my first stories.

Then around five or six, my great-grandfather passed away. My family inherited his desk which was given to me. That was the second writing space I had to write and it was in my room. Being a bit of a pack-rat as a kid, there was very little space on the actual desk to write. Of course, once I started to type my stories, I was out in the middle of the family room on the family computer.

I wasn’t writing anything inappropriate on the family computer, but there’s certain privacy I enjoy in writing away from a crowd.

In college, I had a desk in my dorm room but a dorm room hardly feels like anything is yours. In grad school I had a second bedroom which I used as an office, but when you rent you don’t particularly want to get creative for fear of not getting your deposit back. The desk I had was a good fit for the room, but not my style. Again, there was a shortage of actual desk space even if my knick-knacks were more under control.

The apartment and house I had lived in (prior to now) had a desk to use as a writing space, but it didn’t belong to me. Nor was there a space that was really specifically mine. Every time I sat down to use it, it felt more like borrowing someone else’s workspace. That being said, I wasn’t taking my writing as seriously as I am now. A part of me didn’t think it worth creating an entire devoted writing space.

When I moved to my current locale, I told myself  I was going to set up a designated writing space no matter what.

The “no matter what” had to do with the fact that there is not enough space in either bedroom for a designated space. The rest of the condo is an open layout. I’ve had to get creative. But those are my favorite challenges: interior-decorating-creative-challenges. So despite the open layout and shortage of space, I have very proudly, cleverly, and creatively carved out an entire wall in my family room that is mine. My very own writing space.

And I couldn’t be more in love with it.

From the faux-wall-paper that I used to cover the entire painted wall, to the desk that I envisioned and designed using an old bookshelf and fence pieces, to the shelf hanging on the wall that I bought on Craigslist, to all the other smaller details that make this space my own, I finally have my very own, writing space. For me, it’s like one more piece of evidence that I am a writer. I’ve made it. I’m not getting paid yet. Not very many know my name (yet) but fuck, I’m doing it. I’ve got an actual office chair and desk to place my ass when I want to sit down and get real about getting some words on the page.

I have a writing space. I have an entire writing wall. A wall of my own. This must make me a real writer.

It’s taken months to get here. Between saving up the money to get this piece or that. Waiting for someone to help me drill this part or the other. Unpacking boxes that have been stacked up for months waiting for a place for their contents to go. Just like every other part of this writing journey, I’ve picked at it consciously and deliberately a little bit over time and now I have a master writing space. It’s glorious. It’s mine. Real shit is going to happen here.

And when I reach BIG famous and someone wants to interview me and take a photo of me sitting at my writing space, I can let them into my condo and say “Here it is. Isn’t it wonderful?” And they’ll ooh and aah at my interior-design genius and how much awesome I was able to do with just one wall in a tiny space. The caption of the picture that goes in the article will read:

The ‘sweet as fuck’ writing wall of A.Y. Berthiaume. And they’ll ask me what books were penned here and I’ll say, “If I told you, I’d have to kill you.”

Just kidding. I wouldn’t say that. (Well, I would say that but not as an answer to that question.) Since I don’t know yet which books will be finished as a result of sitting at this writing space, I can’t tell you what the honest answer is.

All I know is that when I hang up my hat for the night and let the words sit on the open page at my kickass writing space, Mar and Moy better not fuck with my writing space. They can play with the cat wherever they like, but they better not mess up the wall. If they do, they’ll have the TAM to deal with. Then they may just find themselves as homeless house elves. Wouldn’t that be ironic? But I couldn’t blame them for wanting to sit there.

It’s an amazing and beautiful space. But… it’s mine and I don’t feel like sharing. 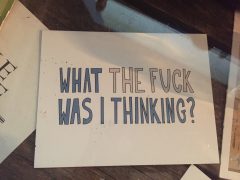 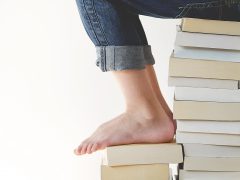 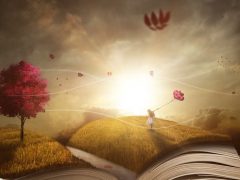